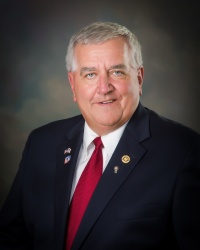 Kirk was born and raised in Vincennes, Indiana.  Kirk is the eighth generation of the Bouchie family in Vincennes dating back to about 1760.  Kirk and Becky have two sons, Doug and David.  Doug and his wife, Samantha, live in Westfield, Indiana with their children, Cora, Damon and Bennett.  David and his wife, Meghan, live in Vincennes with their children, Landon and Graham.  Kirk and Becky have two granddogs, Ozzie and Dagny.

Kirk is the recipient of several awards including the State of Indiana Sagamore of the Wabash in 2004, the 2018 Knox County Chamber of Commerce – C. J. McCormick Community Leader of the Year Award,  American Water Works Association Water Wheel Award in 2018,  Vincennes Lincoln High School Outstanding Alumni Award in 2004, Knox County Chamber of Commerce Citizen of the Year in 2002, Indiana Jaycees Outstanding Young Hoosier Award in 1996, Vincennes University Recent Outstanding Alumni Award in 1987, and the Lionel D. Edie Award for Outstanding Undergraduate Student in Business Economics at Indiana University in 1980.

About Us
Rotary unites more than a million people around the world. Rotary District 6580, based in Southern Indiana, consists of 32 Rotary clubs and more than 1,500 Rotarians. Rotary clubs in our district range in size from 12 to 200 members. Our clubs’ programs involve prominent leaders in every field, and our membership represents business and civic leaders of our communities and our state. Together, we see a world where people unite and take action to create lasting change – across the globe, in our communities, and in ourselves.
Follow Us on Facebook!

* The Columbus, IN native will use the $40,000 award to pursue a master’s degree in Education, International Development and Social Justice from St. Mary’s University in London.
2021-22 Global Grant Scholar Cameron Davidson
Rotary Leadership Institute
The leadership skills obtained at an RLI event will not only help Rotarians in their Rotary career, but will apply to their leadership efforts professionally, as well. Learn more about our next event under the 'District Links' tab above.